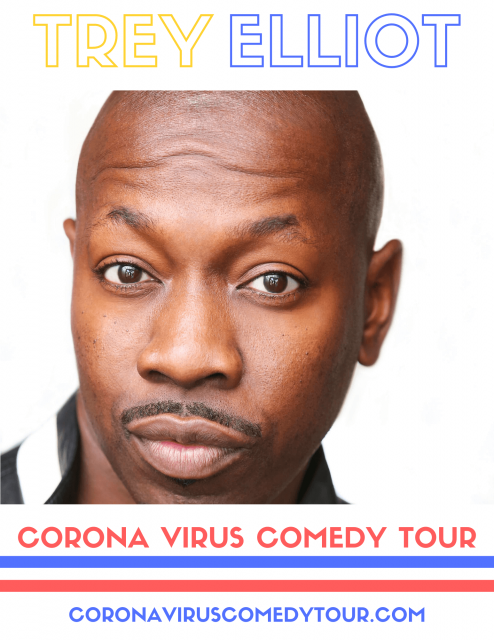 A virtual comedy tour brought to you by Americas best Comedians and Talent.

Laugh with comedian, Trey Elliot, as he shares his experiences during the worldwide corona virus quarantine.

Laughter can solve any problem, which is why it’s not farfetched to call Trey Elliot the "Comedic Problem Solver."

Trey Elliot was born Dec, 30 1980 in Plainfield New Jersey and raised in the town of Edison. After graduating high school Trey relocated to Atlanta, GA where he attended Clark Atlanta University, majored in Mass Communication with a concentration of T.V./Film. To pay for his college tuition he worked at UPS. While entertaining his co-workers, a small dare to perform live comedy on stage is what launched his comedic chain reaction leading to today.

Trey hit the stage for the first time in 2002 at the World’s Famous Uptown Comedy Corner in downtown Atlanta, GA. Since then, Trey’s comedy has catapulted and he has never looked back. Following the greats and his comedic icons, Trey moved to Maryland/ Washington DC where he began to blossom and hone his skills as a comedian. In 2009 Trey’s skills launched him the opportunity to move to the land of dreams, Los Angeles, where he now resides taking his comic career to the next level.

Throughout his career, one of his most rewarding accomplishments was touring internationally to Singapore, Diego Garcia and Afghanistan with the troops for Armed Forces Entertainment. Trey has appeared on “Stann’dup Comedy Show” on Starz, Aspire TV, BET Coming to the Stage, The Last Comic Standing, Tru Tv’s Laff Mobb Laff Tracks, NBC Stand Up for Diversity, Fox Television comedy game show Punchlines, shot a special for Kevin Hart’s LOL Network, and Headliner for the U.S. Troops oversees with Armed Forces Entertainment.